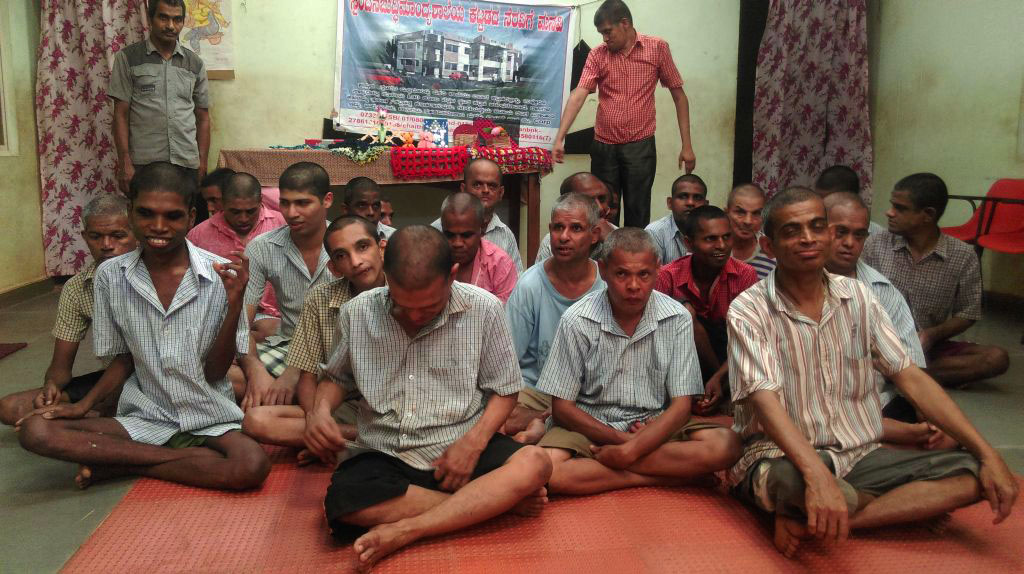 Spandana is a rehabilitation centre for mentally challenged men in Udupi, Karnataka,South India. (Spandana Rehalitation Center phone: +91 82020 05622) They provide proper training with Love, affection to mentally challenged men, so that they can live a decent life with dignity. The men are able to lead a rewarding life in the society. Spandana Rehabilitation Centre is a 13 year old organisation, was founded in the year 2002 by two brothers, Janardhan and Umesh. Ten employees provide service at Spandana. Spandana is a home for 30 to 40 specially-abled men between the age of 13 and 64. The school mainly depends on the donations or support provided by the inmates’ families. Some of famlies, however, are not in the position to support their patient. Spandana offers its inmates three meals a day and carries on activities pertaining to reading, writing, vocational training, and everyday fitness programme. Television is provided by the school. Local social service organisations such as local Lions and Rotary Club provide Spandana constant support and assistance.

GOMC is Google's Online Marketing Challenge contest, in which our interns from JKSHIM MBA 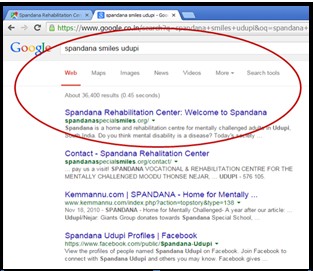 and NITK Surathkal participated. Google provided us with $250 of Adwords budget for advertising Spandana NGO. The participants learnt a lot about Adwords by running the Adwords campaign for Spandana, and also did a service to the underprivileged.

The inmates of Spandana are talented. The handicrafts prepared by the inmates are usually given to the donors or are sold. The Vishranthidhama section (which is an old age home) in Udupi has a Google+ page, but not Spandana, so we created one for them.

Spandana Rehabilitation Centre website is http://www. spandanaspecialsmiles.org/. Spandana, in order to accommodate more inmates has started constructing a new school and hostel building at a neighbouring village. The total estimated cost of the project is Rs 100,00,000 (10 million INR). The build up area is 13,500 sq ft which can accommodate around 100 inmates. The organisation's can be found by Google search for "Spandana Smiles Udupi". They also have a Facebook page which infrequent posts. 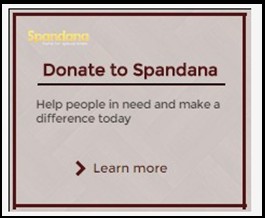 Udupi. Even with a strong website in place, people aren’t aware of the services offered by the organisation. Other customers who purchase the handicrafts prepared by the inmates; for example, local people, institutions and corporate organisations. The competitors for Spandana are organisations that offer similar service in that region. All these organisations compete for the limited disposable income of the public. The chief characteristic feature of such industry is in its long term view of welfare rather than the short run view of profits. Competition is evident, as a large number of NGOs in the Udupi region run on the on limited donations. The unique selling proposition of Spandana is in its service delivery.

Spandana does not have any methods of conversion tracking online (their website is not interactive), and they have not enabled online transfer of funds. The Page Rank of the website was quite low and the relevant website appeared on the first page if and only if for a specific query “Spandana Rehabilitation Centre”.

After considering the client’s (Spandana) requirements, we as a (GOMC) team created four 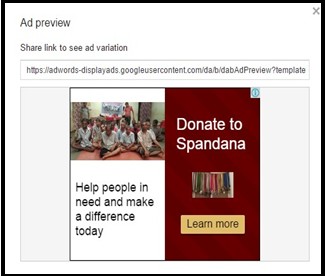 campaigns. The campaigns mainly focused on creating awareness, getting donation in cash or kind and also providing volunteers. The campaigns bid amount was set at NN $/click and NN $/campaign/day. The geo-target area for the campaigns was India and NN.

The allocated budget per campaign was gradually increased, as we gained confidence. After a week of continuous observation of the campaigns, we decided to create Image ads, Video ad, Dynamic ads, Custom feed for Product. This allowed us to quickly get increased number of impressions and clicks. Remarketing was also done. Most of the keywords were either “phrase match” or [exact match]. The location extensions were further added to the campaigns. The remarketing allowed us to reach large number of audience.

The campaign was carried out in April - May 2015. Our team consited of me (Kavya), Chaitanya, Sandeep Dayananda, Apoorva Chandra, Kaushik Ramachandran, Dilip Mallya of NITK.  The Google algorithm judged our adwords campaign CID=5851016777 from India Asia Pacific as Strong. We were just below the semi-finalists.

Bharat Flooring & Tiles - Mumbai
"HMI has provided us with the most value service by understanding our needs and presenting the best possible solutions. " Mr. Firdaus Variava, Director Marketing

True North Learning System Private Limited
"HMI has been instrumental in the development and implementations of our ladder logic development software. "